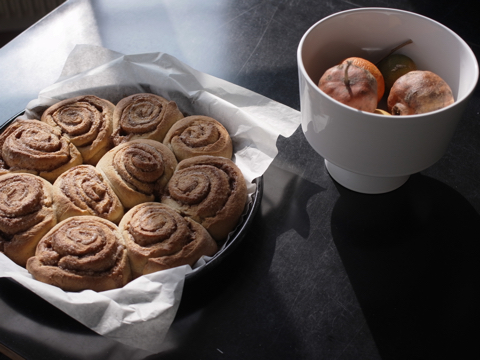 February generally marks the beginning of my impatience with winter. The fact that winter over here started damn late, like in late December, does not make it easier. The cosy winding down, feels not cosy at all anymore! I’m ready for action, totally fed up with winter tiredness. I wanna go out into the garden, get my hands in the soil and start sowing seeds.

Luckily there are a few things one can already do now in the garden, and luckily we had a bit of sun over the weekend.
February is a good month for pruning vines and all your summer and autumn blessing trees.
In my case this is the Cotinus coggygria or smoke tree. I only just found out it’s called smoke tree in English, in German it’s called “wigtree”. How much more fitting is smoke tree! The amelanchier needs pruning too and so does the vine that covers the pergola.

In order to shake off winter tiredness, I decide to spend all weekend in the kitchen and the garden; sourdough was made, and a lovely tangerine tart. But what better to accompany a winter garden session than Kaneelbullar?!
So Kaneelbullar were made too. I decided to try a new recipe this time, not that I don’t like the one featured here before, just that I was in the mood for experimenting. This recipe is fast and easy and the result is a slightly lighter bun.

So the new garden year was started on a sunny day in a still snowy garden, pruning trees, melting snow to make some strong black tea to go with the Kaneelbullar – not too bad I’d say.

For the dough you’ll need:

For the cinnamon butter you’ll need:

Mix the flour, sugar, yeast, salt and lemon zest in a large bowl. Combine the milk, egg and yolk. Pour the liquid over the flour mixture and stir with a wooden spoon .
Transfer to a clean work surface and knead until smooth. If available, use a stand-mixer fitted with the dough-hook. If you’re kneading by hand, expect to be at it for 15 to 20 minutes, until the dough is smooth and elastic, and just tacky.  At this point, add the butter, rubbing it into the dough, then knead for an extra 5 minutes.
Place the dough into a clean bowl and cover with a cloth. Allow to rise at room temperature for a couple of hours, until doubled in size.
Meanwhile, get the cinnamon butter ready. Cream the butter, sugar and spices for a minute or two and keep at room temperature until needed.
When the dough has risen, punch to deflate, then transfer to a lightly floured work surface and roll into a 30x40cm rectangle, approximately 8mm thick. Spread with the cinnamon butter and roll into a tight log. Cut the log into ten 4cm-wide slices using a sharp knife, and arrange into a large baking tray lined with baking paper.
Cover loosely with buttered clingfilm and proof until doubled in size.
In the meantime, preheat the oven to 170°C. When the buns have risen, bake in the preheated oven for around 30 minutes until golden-brown.